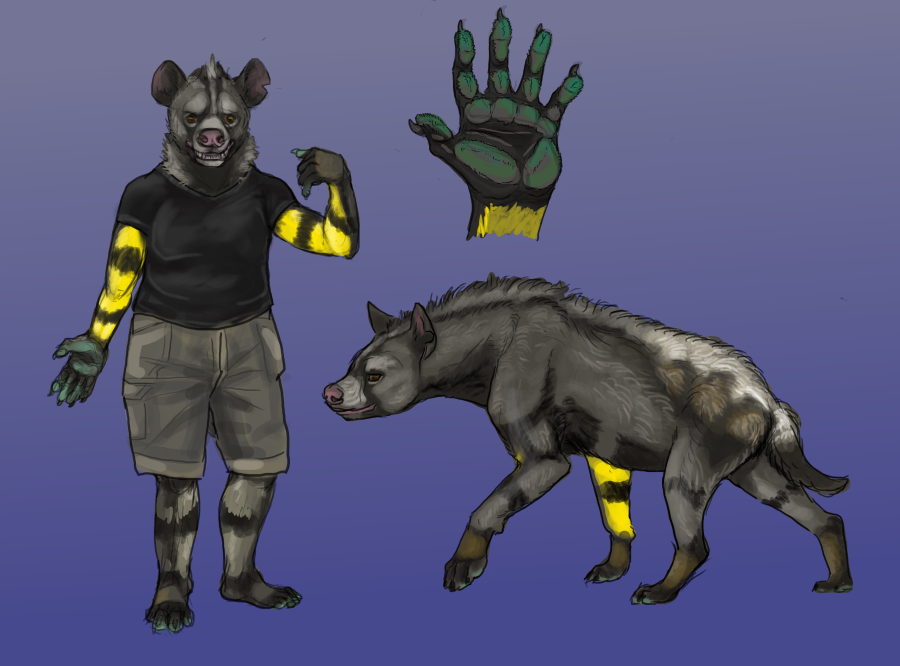 Kyn Amagire is my personal avatar, basically me-as-a-furry. They're a spotted hyena with the colors and some minor traits of an Indian ornamental tarantula (Poecilotheria regalis). Their iridescent palms/pawpads are covered in setae, the selectively-sticky bristles that let geckos and tarantulas walk up vertical surfaces. Kyn is too heavy to scale glass buildings like Spiderman, so their setae are almost completely useless except for picking small objects off the floor with one finger, and stealing people's glasses.

In keeping with hallowed tradition of spider-hybrid furs, Kyn is also probably venomous, on the "ruin your weekend" level of toxicity. If they have spinnerets, they've never told anyone exactly where. Other than that, they are pretty bog-standard anthro hyena: long limbs, short torso, jaws that will bite through a 2x4, tendency to laugh too loud in public. They frequently wear glasses, and a flannel shirt/ dark-colored t-shirt or A-shirt/ khaki shorts outside, regardless of weather or season. Loafing around at home, it's usually a sarong and nothing else.