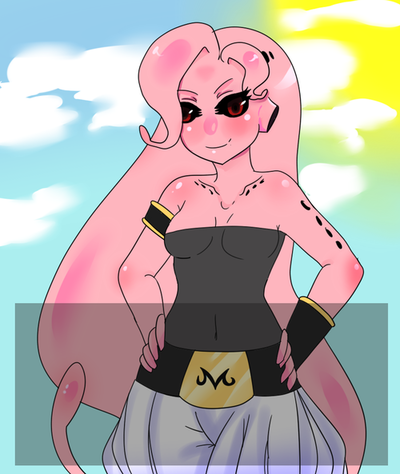 *She is the firstborn Daughter of one of Earth's deadliest adversaries and she is fickle ; the sands of time have buffered her from an idealistic child into a jaded woman all the same. To many, she is naught but a monster that needs just one push to completely and utterly go over the edge, and to those that are close to her, she is merely someone burdened by the sins of her forefather. Flippant, coquettish, yet dedicated to her station above all else, an abrasive mouth tucks away a golden heart reserved for far too few people. *

*Perhaps it is merely the result of her environment, which, while far from unhappy, had their own melodramas nevertheless. Presumptuous fools believed her to be the second coming of a monster that had long since redeemed itself, and she, in her naivety, never once questioned why it had to be that way. Perhaps, because of these expectations, she hardened her Heart and allowed what was expected of her to consume her ; if she was a weapon, then she may as well resorted to fighting to prove those around her wrong. There was refusal, refusal to be seen as anything less than what she was, that propelled her into who she was today. *

And she wouldn't turn back the clock for anything, not at all.

∎ ʜᴀɪʀ ᴄᴏʟᴏʀ: Not exactly eligible to answer that question. She has a tendril, which is as pink as the rest of her.

∎ ᴏᴄᴄᴜᴘᴀᴛɪᴏɴ: Baker, she'd say. Honestly though, she's a martial artist ; current world champion and defender of the northern sector of the Galaxy. She also has a really neat position at Capsule Corp part time.

∎ ᴍᴜsɪᴄ: She rather likes pop and urban music.

∎ ʟᴏᴄᴀᴛɪᴏɴs: West City ; it's a metropolitan by the time she's born, or, well, another metropolitan. She also likes waterfalls and the clouds. The Ocean is also a choice for her to settle by after a long day of training.

∎ ʟᴏᴠᴇ ɪɴᴛᴇʀᴇsᴛs: Not applicable. Bu doesn't put stock into falling in love or anything of the sort.

∎ ғᴏᴏᴅ: Anything bitter. She refuses to eat anything that makes her recoil in distaste.

∎ ғᴇᴀʀs: Despite her flirtatious and coquettish demeanor, she fears being seen as a monster. Or, well, she fears that her monstrous instincts'll overtake her one day. Either-or. Or does she? It's hard to say.

∎ ǫᴡᴇʀᴋs ᴏғ ᴏᴛʜᴇʀs: . Annoying people. Boring people. People that are all bark and no bite. She's a fighter and a baiter. It doesn't take a genius to figure out that she likes people who can walk the talk.

∎ ʟᴏᴄᴀᴛɪᴏɴs: The cold. She's never found it tasteful. Because of that, she frequently avoids Yunzabit heights.

∎ ʟᴏᴠᴇ ɪɴᴛᴇʀᴇsᴛs: Desperate, Otaku sorts annoy her. She really dislikes a guy that can't take a hint, even if she is a bit of a tease.

// Bu suffers from no visible ailments of her person. Physically, she's as fit as a fiddle, with no debilitations passed down from her father onto her. Mentally, however is a completely different story as she seems to have a sadistic streak that far outweighs any sanity that she may have inherited. It often makes her prolong combat simply for the sake of bringing harm to others. You could say that she has a ' docile ' side to her that is the primary personality that many people interact with, and a far more monstrous aspect of her psyche that is formed primarily by her ID. It isn't life-threatening (for her, at least) and Bu seldom has reason to bring it up. If it does manage to slip between the cracks, then she's far more akin to Buu when he rampaged eons ago. As it is emotionally taxing and seems to be one of the only things that drain her, Bu attempts to keep her lust for destruction under lock and key- otherwise she may just give in to her genetic impulses.

Many martial artists suffer some form of injury over the course of their careers. However, because of Bu's species, she finds such things to be aesthetic at best and nothing more. She has nothing to speak of that is wrong with her, for when one can regenerate from being blown away at the cellular level, what is there to worry about? There are not many markings on Bu's form, if any at all.

Bu's full potential is frequently squandered by her own fears of becoming monstrous if she were to go all out in combat. While her growth rate is, in theory, boundless, subconsciously she suppresses a good portion of her skill when fighting weaker enemies so she can simply break them and call it a day. As she seldom uses her Ki beyond flight and strength augmentation when held within serious combat, Bu's ability to fight extreme ranges is severely hindered compared to the rest of her peers. When taking the attributes of her being a borderline berserker into account, one can easily see why she is limited instead of how. When unbound, free and engrossed by the monstrous aspect of her being, these limitations are corroded as if they were iron basking in the embrace of water.

An encounter with the entity known as Majin Bu may leave one easily confused, if not amused by one of the most powerful women in the world. Hospitable and polite under the pretense that being 'polite' is something everyone deserves, Bu's nature, at it's best, is a contradiction to what many expect of her. Teasing to the point of being deigned coquettish, her flirtatious words belay her strength by far more than what many expect. She enjoys getting under the skin of people to the point that she'll make an innuendo laced comment at the drop of a dime. Painting the image of a diva and a primadonna interwoven with elements of a courteous woman, the many shades of her personality have frequently left others in a state of confusion.

They say that mixed signals oft lead to frustration, and Bu proves nothing but. Infuriatingly juvenile, her 'games' are frequently at the expense of her peers feelings, though she seldom attempts to do so with people she finds enjoyable company. Regardless of this fact, her quick tongue borders the acerbic, with insults biting into flesh like a caustic wound and praise coming in the form of thinly veiled jeers. By no means is she nice in the conventional sense, for Bu holds a mentality that's simply too alien to be seen as human.

In the face of the public, she can be articulate and graceful, showing that Bu is capable of holding her own in a pleasant conversation, but finds little reason to do so whenever in her own home. In her own words, she's a Bitch because she chooses to be, not out of spite for the world around her. Yet for all of her airs of a brusque, flippant young woman, she does have a few soft spots - kids and all things cute, for instance, are more than enough reason for her to actually be as charitable can be. With this brought to light, it can be said that Bu genuinely does hold some shades of kindness in her. Subtle as they may be.

Supremely confident in her abilities, Bu's skills are not only a source of pride for her, but something that pushes her each and every day. As a contradiction, she seldom gloats about her boundless skill, hardly having a reason to do so when her reputation does it already. In battle, she proves pugnacious and impatient, jeering enemies on and cutting them off on the off-chance that they do start to get too talkative for her own liking. She has little qualms with crippling, killing, or maiming threats with the intent to put them down and keep them down. Mercy is not something that she offers often, especially if the death of civilians of her planet is involved. To these ends Bu comes off as fiercely protective and devoted to whatever cause she may put her mind to, though in finding a worthy opponent she may drag out a fight for the sake of sating her inner sadist.

The aforementioned flirting may find itself implemented in a fight, though she retains a level-head and frequently does so in order to provide some form of distraction. Because of her pride, however, she seldom accepts help from anyone else, believing that she can do nearly anything on her own without assistance from others. Anger is something that may come and go at the ebb and flow of the tides, though, unlike her father, it is less like a tantrum and more akin to a calamity when she does lose her cool. Harming others with an efficiency that is swift as it is brutal has given Bu a reputation for having a temper that borders the outright nasty.

it can be said that Bu holds little regard to the opinions of others beyond her family. It is because of them that her moral compass is the way that it is today - warped as it may be. She's a girl who honors her father, and thus, is more likely to respect her elders, given that they don't exactly come off as disrespectful to her. To this extent, she does seem to hold a few values of her own that salvage her from going completely of the deep in. But really, she'd say that her only redeeming factors are her good looks and sharp wit.

Oh hey a Dragonball OC I have no life haha ; no, seriously though you guys can draw her all you want, she does need more art anyways.