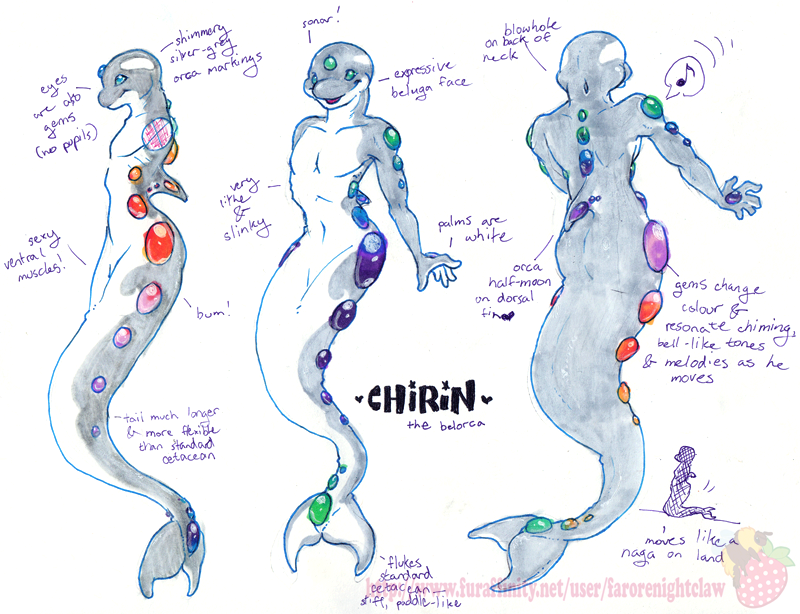 At long last, a reference for Chirin! Some may have run into him before on his home moon of Europa; if he was asleep at the time you were probably lucky.

You see, Chirin's favorite pastime is drowning people and/or causing them to freeze to death.

He does form friendships, and tends to be somewhat biased towards cetaceans or folks with the aspects thereof.

Europa as it is in my storyline:

Quiet, cold, and often overlooked: that about sums up Europa. A world made entirely of rock, water, and ice, this seemed to be the perfect environment for Uplifted cetaceans from Terra's own seas. Sapient whales and porpoises of every kind were genetically altered to be cold-resistent and shipped off to the icy Jovian moon to form an aquatic university and laboratory - and then promptly forgotten. Left to their own devices, the scientific intentions of the Europans tended towards practical mysticism in execution (a concept they call 'phinlogic') and focused heavily on further genetic alterations. Within a few dozen generations, the Europans had so well acclimated themselves to their frigid environment that they had taken on aspects of it, becoming crystalline and gelid, giving themselves arms in place of forefins, their tails naturally elongating in some bloodlines as the need for heat retention became a thing of the past. Of course, such genetic tampering necessarily creates a few unexpected mutations; in this case, some of the crystal cetaceans took on near-magickal attributes, though of course, any Europan will tell you that it's simply another manifestation of phinlogic.

Whether the Europans' introversion, cool intellect, and easygoing shamanistic spirituality were caused by their artificial genetic changes, or whether such traits merely made them more well-suited to their icy environment and suggested such radical scientific progress is unknown. Of course, any Europan would say - it's phinlogic. The trouble is, you have to be a Europan, or a near approximation thereof, to understand even the basic concepts. They're happy to help with that.

Chirin does use phinlogic in practical application to revive those he 'plays' with... however, they may not come back quite the same...