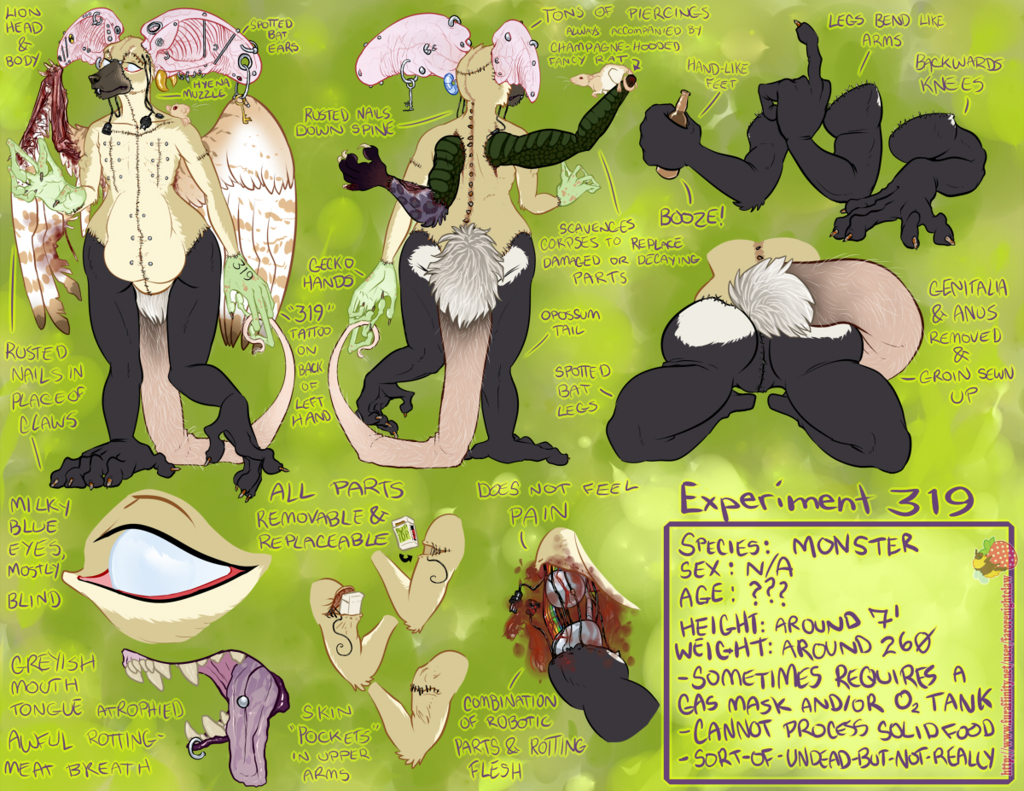 319 comes from a world which is basically our world, but in the future. About ten years from now (and it is always 'ten years from now', not a specific date :P yay fantasy!) a coalition of anthropomorphic creatures, wereanimals, vampires, demons, dragons, and other 'fantasy' beasts stepped forward and announced their existence, and demanded the rights they felt were due to all sentient life. After a little while, their struggles for legal status won through and they were accepted as citizens of their countries of origin all over the world. However, that does not mean they were not discriminated against in daily life - in most places, fantasy creatures were viewed as freaks, subhuman, etc etc.

A side effect of this was that many governments and research facilities started experimenting on fantasy beings instead of on traditional animals or humans. 319 was a sloppy attempt to create a 'super soldier' by combining some of the best abilities of a variety of anthropomorphic animals (primarily bats and big cats, with some gecko and opossum tossed in for dexterity and the bone-crushing jaws of the spotted hyena for.. well.. yeah...) with all the most modern cybernetic enhancements... while still retaining complete control over the resulting critter. Originally, 319 did not actually witness anything its eyes took in; everything was stored in its electronically enhanced brain for later review, and it functioned on sound alone. Unfortunately, this meant that 319 hardly ever bothered to use its eyes, and so they became atrophied and dull, its vision obscured by static and scan lines due to issues with the hardware haphazardly shoved into its head. It could not eat normally, forcing it to return to the research facility to receive nutrient IVs. All traces of sexual anatomy were removed from its body, a precaution against 319 forming outside relationships or attachments that might motivate it to try and leave.

Funding was cut back, and when parts broke on 319, lower quality substitutes had to be used as replacements. In this way, 319 wound up with the junkyard-Frankenstein appearance you see here, with rusted nails for defensive spines on the back and in place of claws and with shoddy stitches just barely holding it together.

Eventually, the 319 project was scrapped in favor of better models and newer ideas, but a young female scientist who had developed feelings for the creature helped it escape the incinerator, and 319 was freed into a world that did not want it. Less than a year after its liberation, the world was plunged into a nuclear winter by enemy nations' endless bickering spiraling down into all-out war. In 319's country (and it is not sure what country it lives in), anarchy rules a post-apocalyptic wasteland where water, electricity, food and shelter are hard to come by and harder yet to afford. Even in this ravaged landscape, 319 still finds that it is treated as a freak, an outcast, and it manages to scrape by as best it can on the fringes of whatever societies have formed, scavenging graveyards to replace rotting parts or to make desired additions, subsisting mainly on bad beer and electricity wherever it can find it.

It should also be noted that while 319 is incapable of standard biological sex, it does acheive something very akin to orgasm when presented with high levels of electrical current or very loud bass-heavy music and sounds.

319 can hook up to other robotic beings or cyborgs and engage in direct mind-to-mind communication in this way.

The sag of 319's stomach is due to an excess of rotten tissue built up in the body cavity. Yummy!

319 is generally shy, self-depricating, soft-spoken, melancholy, and as unobtrusive as possible. It delights in being helpful or useful, and is very proud of its many piercings, especially in its ears. It yearns for acceptance, but does not think that it deserves such an honor.

Sometimes 319 wears dreadfalls or other wigs. 319 rarely wears clothing, but if it does it tends to go for a thrown-together tribalish style; lots of natural fabrics, heavy weaves, neutral tones.

Despite the ability to add wings to the open limb-placements on its back, it is unlikely that any set of wings would be able to carry 319 for more than a short glide.