Haku "NOT AN OTTER" Chimaera[kin] by Chimaera 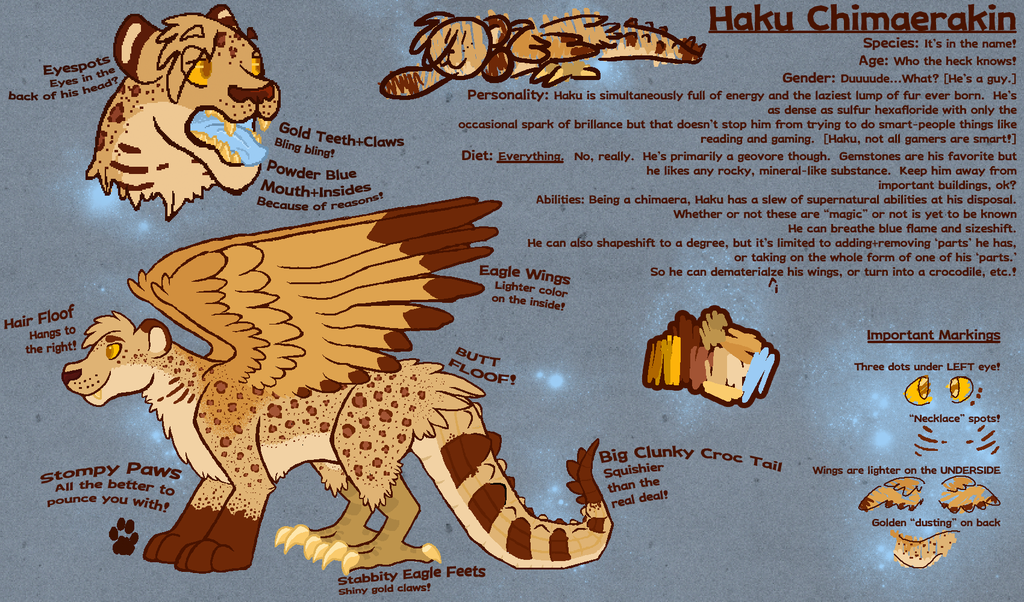 Haku "NOT AN OTTER" Chimaera[kin]

[[CLICK FOR FULLVIEW PLEASE I SUCK AND MADE THIS RLY BIG....]]

The ref that's been half a year in the making because I'm a lazy PoS is finally done! I slammed it tonight so I would have it for Megaplex because I didn't trust myself to get it done otherwise. I'm probably going to make a simpler version for the con? Maybe? I don't know.

This is really all over the place because I suck at references but didn't want it to look hella boring like my old ones tended to be, so let me know if there are any readability issues?? Ehh?? Text and me do not get along.

Anyways I'm still super proud of this, art-wise. That headshot took forever but it was worth iiiit.

Any additional info that needs to be known will be told to whoever I commission if it's relevant, but...If you want to know anything about my big dumb fursona, just ask! I love talking about him because I'm a closet narcissist. [But only for my stupid animal self.]

P.S.: I decided he needed an option "last name" instead of just his species as a surname, so I stole the one I gave him in GW2. \o/

P.P.S: His nickname is a joke. I initially changed his color scheme because I was sick of him being mistaken for an otter, but my friends have never let me live it down. ...And probably never will.