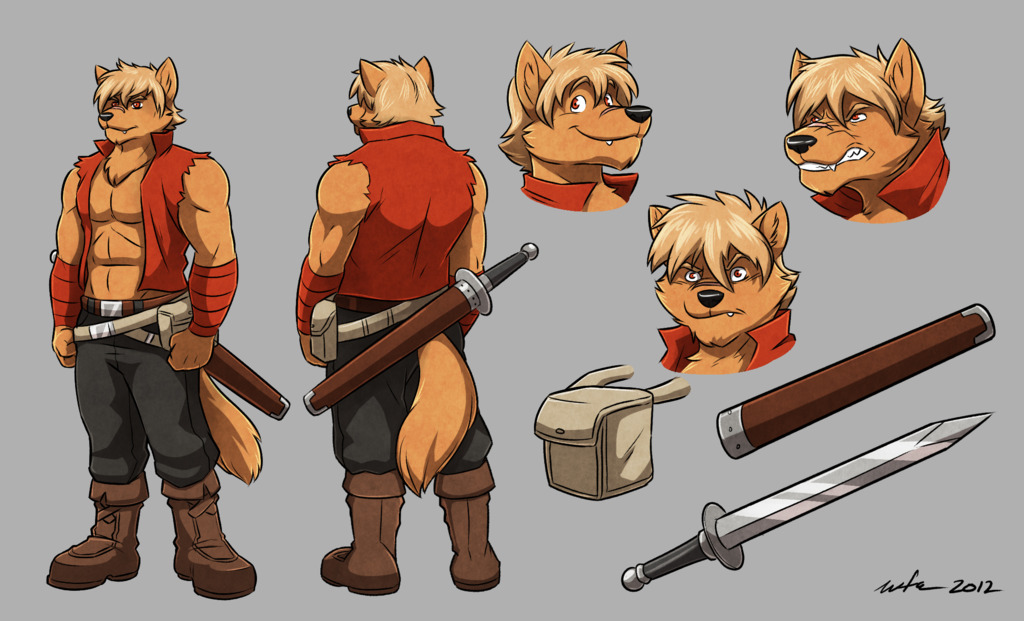 He is quite a nice, if a bit reserved individual, tending to keep his thoughts to himself, which are mainly reactions to events, of sarcastic nature, or both. Jaryl also tries to keep himself levelheaded, though it depends on the situation if he manages to do that.

While he does have patience in dealing with other people, if someone manages to really annoy him (by insulting him, for example) or physically threatens his friends in any way, he is much more prone to angered reactions, or if a situation resulted in a battle either way, he'd go in fighting much more aggressive than he would have if he's calm.

Not much is known of his past, but there has been certain rumors of him being an outcast, thanks to his red eyecolor letting the townsfolk believe that he is the spawn of a devil. He has been in a group of mercenaries for some years, though something currently unknown happened, which is why he was traveling solo again for some weeks, until he found a comrade in the nineteen year old dragon boy Jin in the city Eisenheim.

It's a seemingly typical fantasy-world, currently experiencing medieval times, with many diverse anthropomorphic races of animals populating it. It's also infested by all sorts of monsters, which are very aggressive.

His body is quite decently built, with well-formed muscles and a somewhat tall physique. His brown fur is usually moderately long, his hairdo is pretty scrubby and in a lighter shade of brown. His eyecolor is a bright red.

Jaryl is typically wearing a bloodred shirt, which is open at the front, giving a free look to his chest. He also wears quite baggy, black pants and brown leatherboots.

Red bandages over both of his lower arms and two belts, one of them dark brown and the other one light brown. Affixed to those belts are a little leather-pouch on his left side and a scabbard with a sword in it at his backside, with the hilt positioned so that he can grab it with his right hand without problems.

Well, as the title of this submission already says, this is a reference-sheet for my Main Character, Jaryl Garen, done by the excellent

This is going to be his finalized look, after many, many commissions where his physique, clothing and hairdo changed a little bit, with all artists I've commissioned putting in their own interpretations of all his details on him, so I'd like to thank all artists I've ever commissioned for putting up with my wishes and drawing pictures of my character. :)

Also, I like how he's gotten bulkier and stronger over the years, since he started out as a pretty flimsy teenager, but look at him now, he's now in his 20s and got some pretty well-toned muscles, I like that. ^_^

I don't think I have to tell you that, but check out

wfa if you haven't yet! She's got an amazing style! ^^