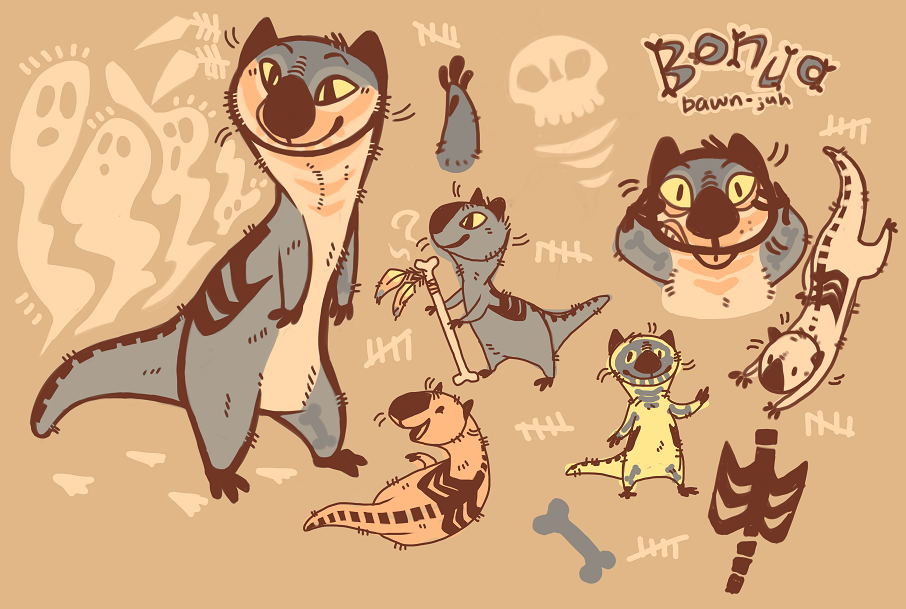 ((Bonja was originally designed by Rooibos, then adopted and developed by me!))

Bonja lives on the overgrown bank of a muddy river, often sleeping in a little hammock or stolen bird's nest. She has lived there all of her life - although, to be fair, she's a young little otter - and loves it! Bonja has been fascinated by pranking from a very young age, and has spent most of her young life doing just that. Most of her pranks are fairly harmless, but incredibly well-planned and clever. Sometimes they can get her into trouble with larger, less forgiving animals, but it doesn't stop her from continuing to prank them. Because of this, most of her friends are creatures of her own size, since when they decide to get friendly revenge, it usually doesn't involve trying to eat her.

When she was younger, Bonja also developed an interest in voodoo and strange magics. She's fairly proficient in her craft and has great potential to do good, but that potential is pretty much wasted by her rather focused interest in pranking. Nowadays, she mostly uses her skills in voodoo to come up with even more elaborate pranks, although she'll occasionally whip up something that's actually useful.

Bonja also likes math and written language, but her interest is largely dismissed as part of her voodoo, since most animals can't count past four or read. Bonja can't read either, really - she can spell her name and a few choice words (fish, beware, no, etc), but beyond that her skills are pretty rudimentary in both subjects. Still, for an animal she's considered pretty smart. (Or just crazy.)

Bonja is adventurous, sassy, and a bit of a goofball. She is very daring and unafraid, but also rather brash and doesn't think her decisions through. While good-natured, her enthusiasm can sometimes get the best of her, and she's often pushing her friends into doing things she thinks might be fun; whether or not it's just another one of her pranks is ALWAYS a question, in this situation. Bonja can be sort of grumpy when things don't go her way, but for the most part she is a bouncy, excitable individual with a lot of spunk.

Bonja hates her given name, "Bonejaw," and shortens is to Bonja whenever possible. If asked, she'll say that the took the "ew" out of Bonejaw. (The e and the w.) Most animals don't understand this, since they don't understand written English.

Sometimes, she'll write weird notes to her animal friends, but they don't really "get" the notes because she uses a combination of written English words/letters and symbols she makes up.

Grumpy elder otters, animals with lots of sharp teeth, feeling sticky, carrying too many things, being misunderstood, being out-pranked, her given name.