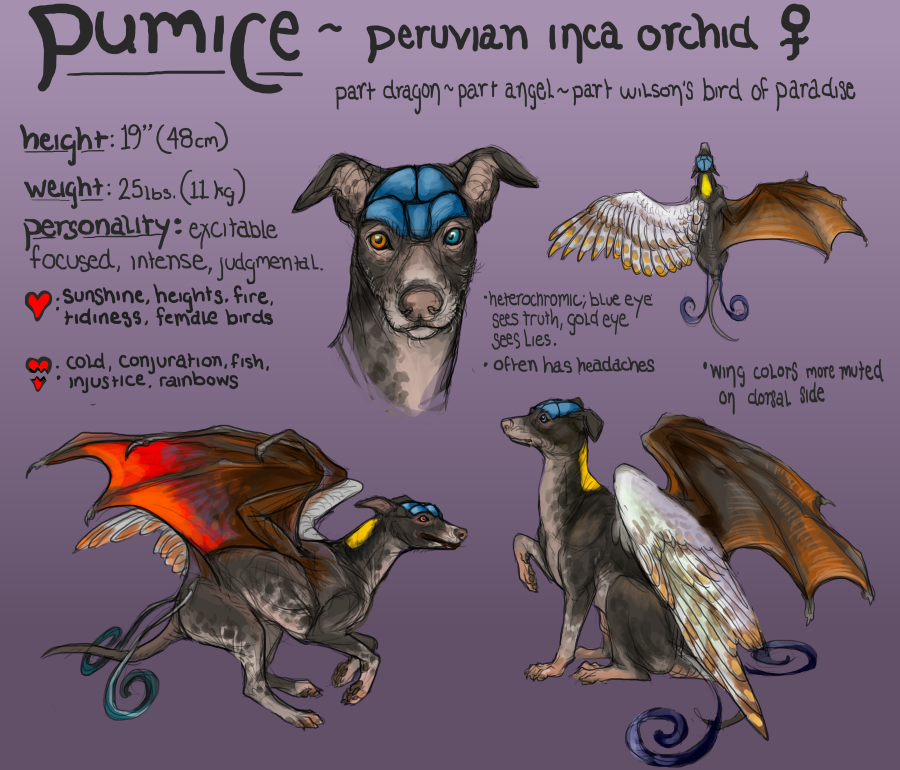 Pumice is the mascot of the Department of Summoning and Conjuration at CAM (College of Applied Magick), and her primary duty is to serve as a warning to novice sorcerers on the dangers of sloppy penmanship and incomplete research.

She was brought into being during a thesis ritual which was intended to allow a powerful demon/god to inhabit a mortal vessel. Lamentably, the person who had written down the relevant arcana was not the person to recite it. A few syllables were given the wrong emphasis, and instead of becoming incorporated into the manifestation of a god-king on earth, the unfortunate group of graduate students merged their essences into a small, excitable dog, along with, for some reason, a small, excitable tropical bird. Pulled into the binding spell along with them were the soul of an ancient dragon and the true name of a fallen angel, and these, too, were incorporated into the entity that became Pumice.

Personality-wise, she is the gestalt of several chronically sleep-deprived college students, an imprisoned dragon, a morose angel, a hyper-sexed flashy bird, and a small hairless dog. Life is complicated. Her dragon powers largely cancel out her angel powers, for which Pumice is deeply thankful, otherwise, she'd never get any sleep. As it is, she often has headaches brought on by her arcane eyesight. She can also breathe fire, at least after she's had a couple of drinks, but mostly lives a life of quiet contemplation and occasional frenzied bouts of dancing.

When not attending lectures at the college, she spends her free time playing video games, chasing squirrels, and mooching around the dorms for free weed. She also loves flying. Not with her own wings, of course, which don't even match: Pumice is fully instrument rated in Microsoft Flight Simulator and is working on obtaining her pilot's license.