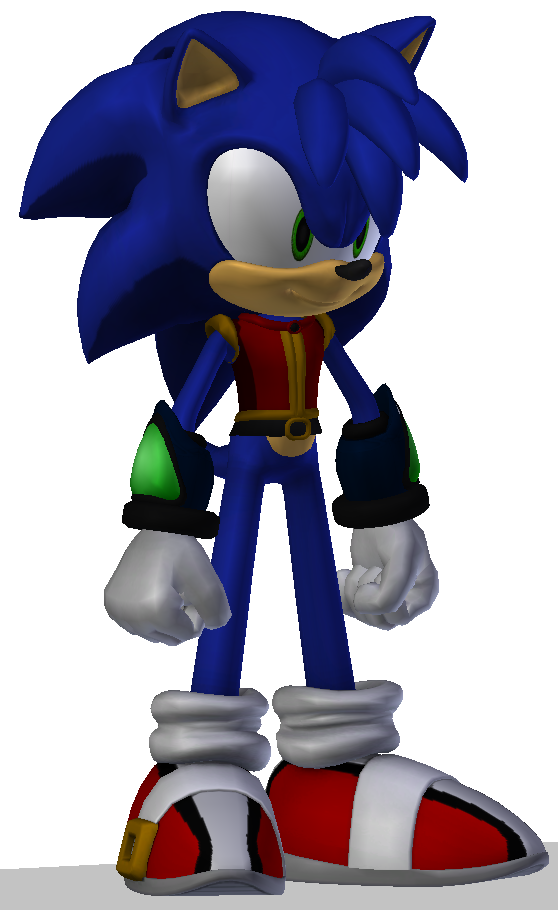 well with all that happen I guess I should update it ^^;...

ok but first I want to put Thank to Turbo for making the Runnic model for me, ^^ his one of the Greatist on models makers I know.

and now the Bio.

home: at the bottom just outside the Hill tops ( Sonic the hedgehog 2 Hill top zone ) that close to the Mystic Cave ( again sonic the hedgehog 2 ), where the forbidden forest is close by, as well as a big lake once known as lake of the lady.

Weapons: soul sword called "Soulust", when not using it, it turn to energy and goes into his heart. "it cannot kill any living person, it suck the darkness out of a person heart when it touch them."

Items of power: Power Stones, magic embedded gem stones by his father, that give him Sonic Speed and flying,"Left Gem is for flying, Right is for sonic speed."
combind power is a faster healing factor, the CyberTech armor that hold them interface their energys clearly into his body witch also give him the able to use magic, but only as long as they are on his arms with the Gems, with out them he doesn't have any power or magic.

Destiny plot: he is the Protector of the "World Rings" as their magic energys flow in worlds and dimensions, their energys remain into alot of story books given life to story's that has class with them over the 1000's of years that they have been of the world.
unlike others who use them Runnic can use them with out offering a life, each ring give Runnic a added power, much like Megaman when he copy a robot master's power, but Run must put the ring on or hold it in his hand to use it power.
When all 7 world rings are in his hands, Runnic can become Super, he glows a bright green like his father's color, and his eyes turn a silver color, this from is a reminder of his father's past and his destiny.
to collet the world rings Runnic always has 1 on him, that open up at random times and take him to other universe's other dimensions to find the other 6 rings, sometimes he will return to a world he been to before, other times its a full new world or destent past or future he never knows, yet he always returns home only mins has past on his world.

Reason of fur Color: Runnic's father is Green, his mother is purple, yet Runnic is blue, the reason behind this is behind his father's past, at a point a dark power over took Reeno and turn him to crystal, when his body was shatted and soul set free to live a new life, some of that dark power remain in his soul.
the dark power went into Runnic and his fur remain blue as the color of the one who hold that dark power, yet his eyes remain green like his father's and mother's eyes.

Quick history: on the day he was born, his mother Lilith-la choice a name from the old words of her people from Echidnaplolis of Egypt times, "Run-Brave", "Nic-Warrior" "Runnic the hybrid was born that day.
as the years past, his mum and dad teach him things on both of their learning, Tech and Magic.
even thought Runnic lack the magic energy to use magic he enjoy learning cause it gave him time to be with his mum and dad as they have fun as a family.
Reeno even got Runnic to learn to fight hand to hand and even use a sword, Lilith-la's friends help in the learning to as Julie-su help the combat Training, and Lien-da help the teaching of Tech, to try to get him to keep a open mind that anything can be work out even if its tech or magic or energy, as all are link in their own ways.
as time went Runnic got friends and the village he lived in grow bigger, as 2 fox's live in the village now Fiona Fox and Vex Fox who both lost their family's yet the 2 became sisters.
then there Lora Wolf with Rose the plentwoman, who have 2 childen Sirus who was already in his mother Lora as a baby before his father just was gone, and Dawn who the child of Lora and Rose.
others came to the village and made it their home as well as having jobs or that in the city far from the small village.
one day Runnic meet Celene bat, witch where his destiny started, as he had to help his dad's former world to live on as he was made to look like a wingless bat with illusion magic.
after the end of the battles to save the world, the remaining of 2 half starts being one once more, Runnic saw no one should have so much power so he try to devied it, yet the darkness that remain in his body, cause a horrible thing to happen, the star became into 2 halfs yet their energys even out and became 14 items, 7 gem stones that hold power over time and the life of the planet Sylvanna itself, when Xixa took them the planet begin to glow with life more pure than it ever was, the people of the world was warp in a simie out of time of the world, where they over the years made city's where they all live in peace ( Sonic CD Special Zone's to get teh time stones ).
the other 7 became the world rings, cause of the darkness more focus into them, they was link to Runnic only to use easy and freely, yet others would have to offer a life to use them, as it was a life that was took to start all this in the first place.
Runnic's adventures to collet them made him cross roads with a other who seek them, who want to make a wish on them, with this enemy Runnic has face off a Metal version of himself, a Mecha version of himself and a evil clone of himself, yet this evil has yet to show its face to him.
Runnic's adventures continue as he push forword to help others help his friends, his not a cool person yet he there to help others that all he want to do to help others.

Hidden past: Runnic's soul is not a normal soul and cause of this, he can not get close to the chaos emeralds as their power would waken something dark with him in, as a protective thought on his father's ideas, the power stones on Run's arms their energys make a barrior to protect Runnic from Chaos energy, yet when his close to them Runnic begin to feel ill and sick.

Runnic the Hybrid update on his BIO is cause of all that happen with ARchie comics and Sega Sonic so far.

the good side points are happen thank to many friends, like Dawnbest, please check out Dawnbest art and webcomic Sylvanna
http://gloryhound.info/sylvanna/

once more I thank TUrbo for the model ^^

Runnic the Hybrid is my char he belong to me. yet one day I hope to get him in his own game, and maybe in Archie comics, I know its a long and impossible idea to wish for, yet I finally got a model of him, and hoping soon everyone can get their chars as one to.