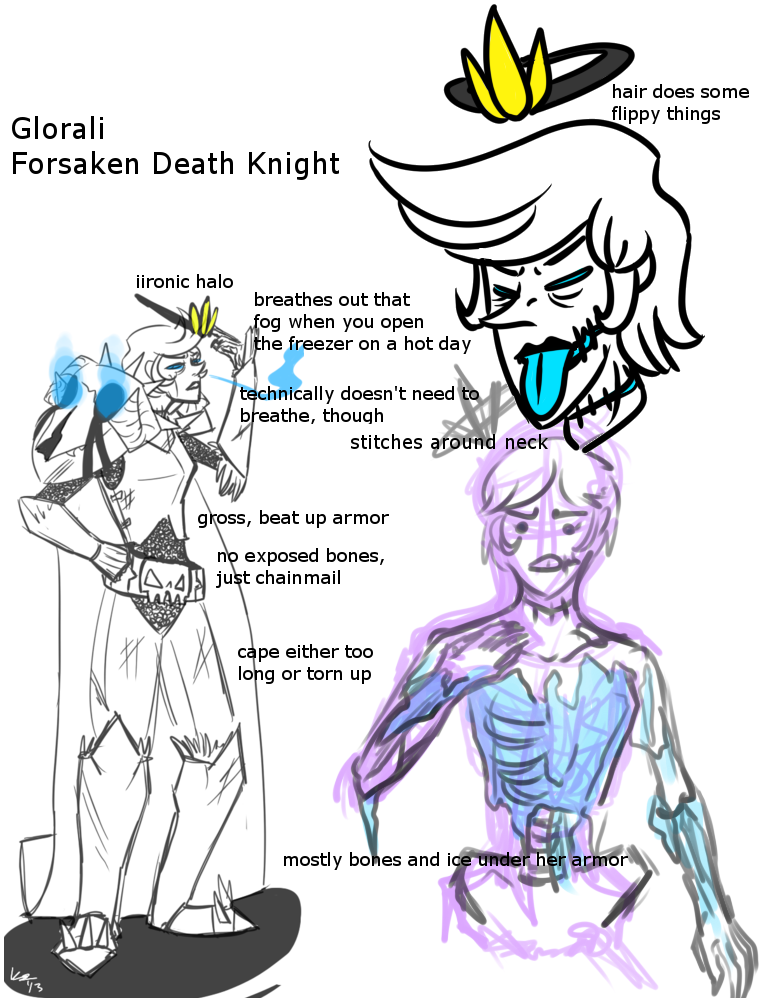 Does not actually use her last name because fuck those guys.

Glorali remains bitter and angry that she was reviled as a traitor when her resurrection at the Lich King's hand was not a matter she had a choice in. In the same vein as this, she is completely unapologetic about things she's done in the past.

Almost always restless (the exception being if she was given a task to complete), Glorali is prone to wander off to slaughter mindless Scourge for lack of anything else to do.

Typically, Glorali is cynical, sarcastic, and blunt. On the occasions she does attempt to be friendly, it usually backfires and leaves others uncomfortable, especially if they are living companions; her "jokes" are always horribly gruesome.

Acts like a bit of a diva when she's given a hard time about loyalties.

The daughter of a miner, Glorali spent most of her years sheltered and forbidden from doing anything "dangerous". She apprenticed as a jewelcrafter, using gems her father brought home from the mine. This peaceful life felt like a prison to her, and when she was seventeen she ran away and joined Lordaeron's army.

Glorali's determination and ferocity in combat more than made up for her rather small stature. By the time the Second War ended, she was a hardened soldier of the Alliance. In the time between the Second and Third Wars, Glorali worked as a guard. She was called to arms again for the Third War, but died to the Plague before she even saw combat.

When the Forsaken were freed, she immediately attempted to return to human civilization, and was met with nothing but hostility. Fortunately, she was able to escape mostly unscathed.

It was clear that she was not welcome among the living. Glorali returned to Lordaeron to begin living her death. Having retained most of her combat skills, she simply continued on as a soldier under the banner of the Forsaken.

When Arthas rose to power as the Lich King, Glorali wound up on the losing side of battle against the Scourge again, and was raised as a Death Knight to serve him.

After being freed from the Lich King's control, she tried to return to the Horde, but was met with such hatred and disgust that she immediatly left for Northrend. Until the Lich King's death, she fought on and off under the banner of the Ebon Blade, helping to defeat the Scourge army. Afterwords, she spent some time aimlessly traveling, still bearing too much of a grudge to return to the Undercity.

Around the time of the Shattering, however, she decided that she would have to face her fellow Forsaken again, and that she may as well get it over with.

History ends here because the server I wrote this for is set to Cataclysm.

Was all this text necessary? WHOOOO KNOOOOOOWSS