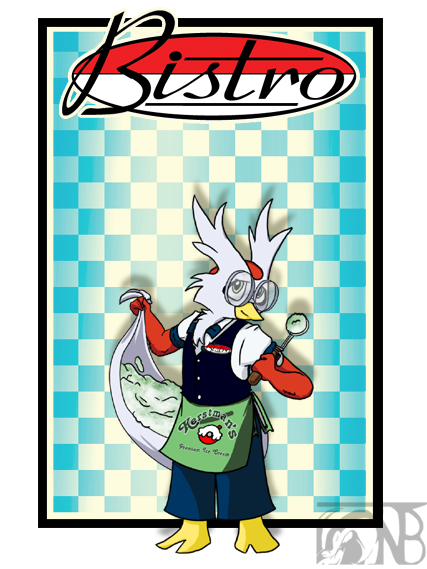 Meet little Michi, the child prodigy. Born and raised a gifted child from the day he was hatched, this little 'bird has already managed to skip a couple grades and is bright enough to even give college a try...of course, life as a Senior has not been kind on him. For as bright as Michi is, his social skills has much to be desired. Since he became a Senior, the pressure on him has grown greater than ever, his grades fluctuating as his shyness grows. He has potential to be part of the student body, but several factors (like aforementioned shyness, especially when confronted with the group's more intimidating members) keep him from this...and just as things started to look its most bleak, a lowly Lickilicky goes up to him and asks, "How good is your cooking?" As Michi's parents both own a rather well-known ice cream company and he himself has picked up a few tricks from them, he was a liable candidate for Team Bistro. With any luck, this unorthodox group may be his ticket to getting his grades - and confidence - back on track.

Michiel has been dubbed "Dessert", and not just for the obvious reasons, either - when the other team has proven themselves to still have the strength to go on, then it's time to take 'em for a loop and knock 'em cold! And "cold" is exactly what Michi can deliver in spades; thanks to his unique family pedigree and his own genius skill at mastering many of his primary type's moves (beyond just Present, yes), Michi's special moves are among the strongest in the team. Throw in the sharp mind of a careful strategist and a small frame that makes him hard to hit (especially when skating across the ice) and you have the making of a little powerhouse...

...or so is the plan. See, that shyness he's developed since meeting up with his Senior class (and getting a painful reminder of the fact that he's one of the youngest members there) has transferred over to his fighting as well, making for quite a few humbling moments. Were it not for Lilly and the others thinking he has what it takes still, he'd have probably given up hope by now. Even Myra said it once, or at least he swears she did...