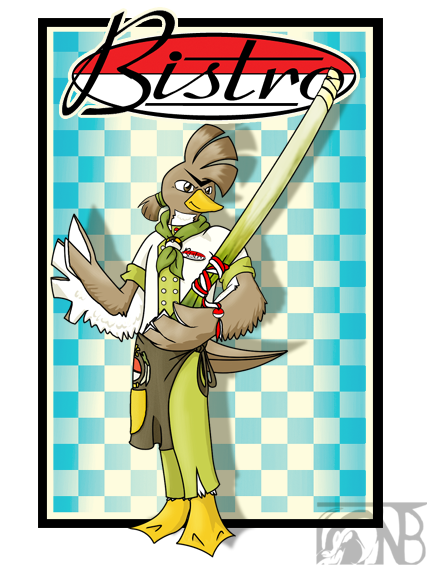 Angelo is just the ace-in-the-hole team member Lilly has been hoping to find for her team, a guy who knows his way around the kitchen as well as on the battlefield. And it couldn't be any more truer than with a descendant of "Spigolo" De Kanto, the legendary gardener/sword smith. Yes, it was he who bred the world's first giant-sized leeks, powerful plants that are as deadly to wield as they are delicious to cook. Angelo himself honors the tradition by using "Bonewhacker", a 5 1/2-foot long leek he took years to properly grow and prepare for use in combat. Great personal triumph aside, though...he's a cocky bird, a bit too fond of his life's work that he might prove troublesome to get to work well with others. But hey, maybe he'll be like Bonewhacker and reach his full potential as a teammate and friend with a little time and patience.

Angelo is "Appetizer", which fits him surprisingly well as he's usually the first one to fight (either him or Myra, especially if dealing with Ground-types) and also the one with the fastest moves out of any of the team members, which is usually enough to whittle away at the defenses before letting the others finish up the job. While he's not the strongest fighter, he IS the most skilled, having excelled in nearly every blade-based move a Farfetch'd can learn, made all the more dangerous thanks to Bonewhacker's size.

Angelo still doesn't know what to make of the team. While thankful for the opportunity to be able to compete and demonstrate to the world the power that his family-bred leeks possess, there's still much to learn as a student and a teammate. On the other hand, he can't help but smile in amusement at Lilly's childlike cheerfulness and the fact that Michi sees him as an older brother. Myra rubs him the wrong way, though, which is something he's gonna need time to overcome.