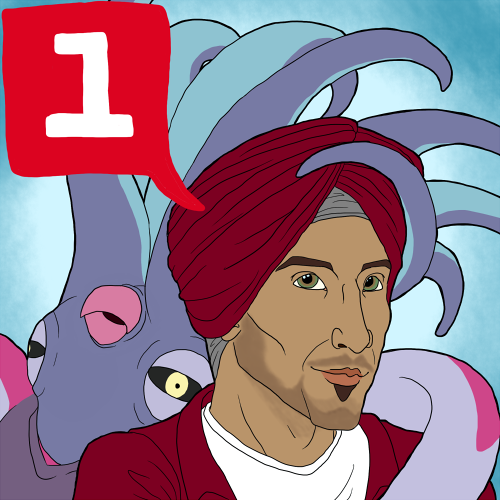 Tarik is my Pokemon X Trainer. Soon as I saw I could make a PoC in my game, I couldn't resist. Arabs are the second largest population in France after all.

He was born on March 7th in Coumarine City to Azhar Mehdi Khaled al-Fulan and Sa’ida Mahmood Tariq al-Handal, who were immigrants to Kalos. Used to the quiet country, they struggled with city life and the leaps in technology. His parents were of a religion that forbade Pokemon battling, considering it abuse. Due to this the thought of being a Trainer didn't cross his mind until later in life, and he planned to become a pharmacologist instead. By the time he was sixteen he had changed his mind, and it got him disowned and kicked out of the house, leaving behind his parents and his younger sister, who is devout to their parents' religion and so turned her back on Tarik.

He left not only Coumarine, but Kalos. He finished his education on his own, having a short relationship with another man that ended when he was pressured for a more physical relationship than he wanted. He left and settled down in Johto for a bit to take a couple years in pharmacognosy (the study of medicines from natural sources), thinking that perhaps he could gain back his parents' favor. It was there that he met his first girlfriend. He had no interest in sex until six months into their relationship, and even then he much preferred pleasing her. This caused some strain between them because she thought he was faking his interest in her, when he just simply didn't care for penetrative sex, either as the giver or the receiver. She broke it off after two years and Tarik ended up leaving Johto to travel to Sinnoh, where he ended up befriending the man who would end up sharing his religion with him.

And so he started training as a Sikh-analog, where his teachings could be summed up as: “Realization of Truth is higher than all else. Higher still is truthful living.” Equality is extremely important to him, and discrimination based on race, creed, caste, color, gender, or sexuality is forbidden in his religion. His one constant (what some might call God) is beyond time and space, and without form. His dastar is an article of faith that represents honor, self-respect, courage, spirituality, and piety, and covers his Kesh, or uncut hair. His four other articles of faith are his Kangha (a comb in his hair), his Kara (an iron bracelet), the Kirpan (a short dagger), and the Kaccha (a sort of shorts-like garment). He also learned a gatka-analog style of martial arts training that focuses on melee weapons such as certain kinds of swords and staves. During his training he met a man that he started a relationship with, but again due to his disinterest in penetrative sex, it ended. However, this time he was much more at peace with himself, and he ended up going back to Kalos to become a Trainer.

As a Trainer he considers each and every one of his Pokemon a companion, and would be hard pressed to pick favorites. He loves and spends time with them all, and is currently fully bonded to the 25 Pokemon he has. He has four of eight badges, and for the first two of those he couldn't care less about Type advantages or strategy, though he's gained knowledge since then and battles a little bit more intelligently. He loves battling at the Battle Chateau, though he really dislikes the snobby rich folk within, taking a certain pleasure in defeating them and taking their money.

He's a really quiet, reserved person . He enjoys helping others and will go out of his way to do so. Honestly anything else you might want to know about him is probably covered in the Tarik headcanon tag on my PAC Tumblr.

I just really love him. The Pokemon with him is Isra, his Malamar, who, at the time of this drawing, was the Pokemon he'd beaten the second Gym with single-handedly. Dark/Psychic versus Rock... toldja he wasn't too keen on Type advantages eheh.