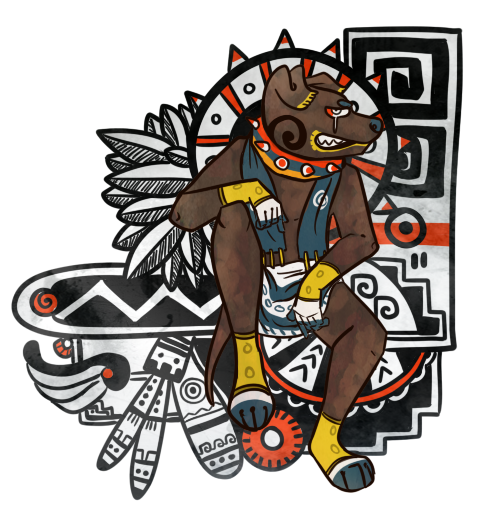 been drawing up some concepts for some characters. I can't make them too detailed, because if I do end up making a full on animation, im prolly gonna die if I made these characters as detailed as they're suppose to be. So I simplified them.

Xolotl, the god of sickness and deformities, as well as death and lighting, is often described as a sickly, ugly, dog headed deity. Not much love for Xo in the world of the gods, he was also a being of misfortune. Dogs, back them, were considered filthy creatures, and twins, which is another thing he is a god of, were taboo. He also guided the dead to the underworld, and actually if it wasn't for him people wouldn't exist. For some reason it's also said that he is scared of lighting...even though he is a god of it??? oh you silly xolotl you. I think he's such an interesting character, I could keep writing more about him, but I think that's enough for now, haha.

I use the Codex Borgia for all my Aztec designs. I know so there's so many codices, but it's just easier to have one solid reference. Honestly I don't want to be looking at a multitude of books and compromising a design.