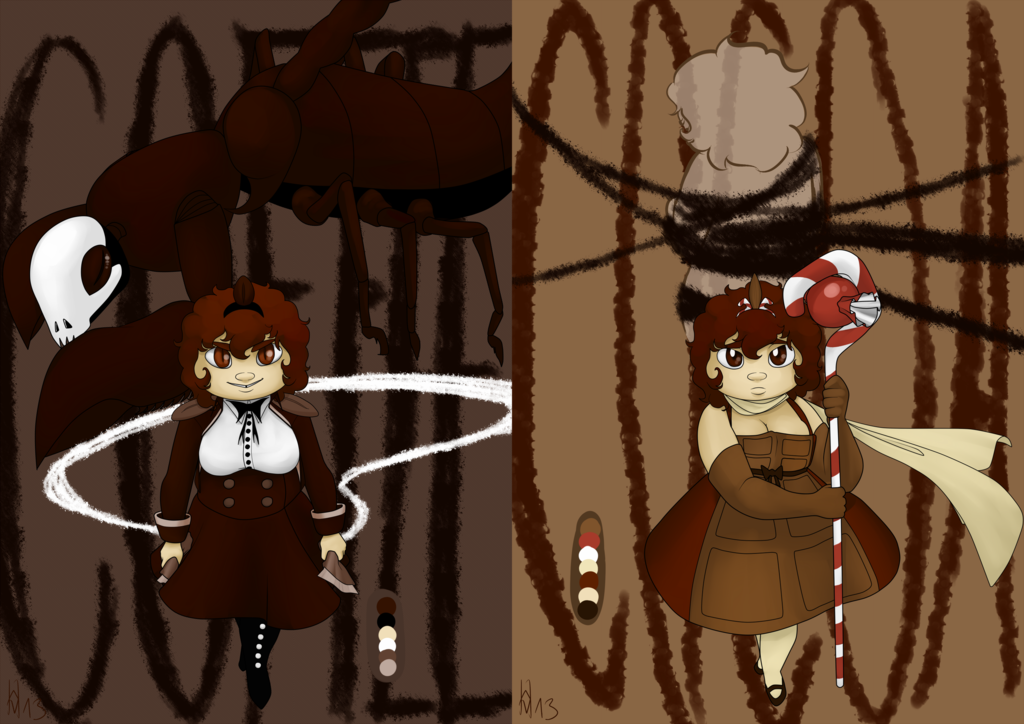 Backstory:
Candy Cane was a completely normal girl, until one day she discovered latent magical powers. Ever since then, she can transform into a magical girl and has - under the pseudonym Cocoa - defeated many a monster that threatened her home up until recently. What she didn’t know was that the source of her powers is a demoness called Coffee that resides, sealed, inside her body - and the ability to transform into a magical girl was Coffee getting stronger inside her. At first, this posed no problems. But the more often Candy made use of her new powers, the more often Coffee could surface and “take over” her body for short amounts of times. In an attempt to turn the good-natured girl bitter and lonely, and therefore fertile for a deal with the devil, Coffee drove away many of Candy’s friends and loved ones from her. So when the girl heard of the first Tumblr Rumblr, she decided to join, hoping to build new friendships and defeat her loneliness.

Cocoa lost early in the tournament, and Coffee, seeing her chance at finally breaking the seal by entering reality slip, lost her patience with her slow and manipulative plan. She started communicating directly with Candy, and taunted and threatened her. Scared, confused and convinced that she now was a danger for everyone she held dear, Candy vanished shortly after her last battle in the tournament and retreated into isolation, making her even easier prey for Coffees manipulation.
Now, she has returned, her once bright smile a now a tired expression. Not that anyone would have much of an opportunity to notice now - Coffee rarely lets her back to the surface of her own mind anymore.

Description:
Both Coffee and Cocoa/Candy reside in the same body, which is why they look essentially the same - aside from the different costumes in magical girl form. Sometimes Coffee can also be recognized by a sharper tone in her voice when she speaks, and a more sinister expression in her face. However, she is very smart and manipulative and therefore has no problem adapting the sweet, friendly and upbeat demeanor of her host for show and to appeal to the softer side of others. After all, she had a long time to study Candy’s behavior.
If manipulation doesn’t get her any further, Coffee is quick to get violent, and she is absolutely ruthless. Not only will she go to any physical lengths to defeat or even kill her opponent, she will also grasp for every opportunity to gain additional advantages. This includes exploiting the psychological and physical weaknesses of her opponents, even though she will not waste any time tormenting someone if she can kill them directly - at least in battle. It’s just more effective that way.

Candy herself has actually started to alternate more between apathy and quiet sadness, and she has become quite obedient to Coffees demands. She still definitely is by far kinder and gentler than the demoness inside her, and will refuse to harm anyone if she can instead solve the situation peacefully. In battle she will pretty much never attack first and usually start off only defending herself while trying to convince her opponent of a peaceful solution, unless said opponent exhibits really obvious signs of being a threat to others. Like, say, munching on a human arm when she encounters them. Only then will she start attacking herself. She usually goes for a deathless defeat, although she does not hesitate to eliminate beings that obviously pose a threat to everyone else - she views that as her duty as a heroine.
Originally she was a very upbeat and open girl, even though she sometimes felt pretty lonely. Now she has become much more quiet and sad, but reaching out to her might just lure out the old Candy again.

Forms and Powers:
When not currently transformed (ergo in Magical Girl attire) neither Coffee nor Candy have any powers surpassing those of a common human being. Candy’s body even is a bit slow, weak and clumsy at times in this state, so if they even assume it during the Tournament, it’s usually either due to having to recover from something or to cover up which one of them is currently in control of the body. Because in this form, they are absolutely indistinguishable.

However, they do have distinctly different Magical Girl forms and even slightly different powers. Cocoas attire is more colourful and she sports a staff, which she can use as-is or to use her magic with. Said magic is fairly limitless, but strictly candy- and pastry-based, mostly consisting of the creation of various sweets in a creative and punny manner. This can range from marshmallow mines to cinnamon guns. Most of these things can incapacitate well, but are not really lethal.
Even without the staff, her strength and dexterity are notably enhanced compared to her human form, but she can use no magic without it. If she transforms back however, the staff will disappear no matter where it is and return to her upon her next transformation into Cocoa.

Coffee profits from similar enhancements regarding her physical abilities, but differently than Cocoa she carries her trusty Nun-Sugs as a weapon. The sugar of these can work like a string between the two parts of the sugar pack, becoming thinner as they grow further apart, or she can use it to draw magical symbols which she needs for her kind of magic. Most of her magic consists of the summoning of lesser, impish demons with no notable abilities sans their sheer number if she manages to keep a portal to their realm open for long enough. These demons often resemble something between a shadow and walking hot beverages. Occasionally she also just summons a dark, sticky, liquid-ish matter that she traps her opponents with though, or changes the shape of the sugar crystal-string to something more harmful. One could contrast the effect of her sugar to that of salt meant to protect from occult harm. Just like herself, her demons go for the kill, and the thin string her sugar can become might actually ba as capably of lethally slicing things as a blade.

Neither one of them can use the powers that are exclusive to the other, and neither one of them can transform into the Magical Girl form of the other. So if Coffee assumes control while their body is still in Cocoas form, Coffee can walk and talk normally, but has to transform into her own Magical Girl form to use any magic - and the same goes vice-versa. The transformation has to be done via a pretty sparkly and tasty-looking transformation sequence, which makes them vulnerable for a short timespan each time.

If a character is able to travel into mindscapes, he might encounter Coffee in her actual, natural form there. It resembles something between a lobster, a scorpion and a spider, and appears to be pretty big when encountered within said mindscape. Candy on the other hand will always appear slightly ghostly and wear casual attire there or be covered with a dark, coffee-like powder, and she can’t access her powers there at all without not only Coffees permission, but also active support. Whatever Coffee can do withing a mind or imagination is up to the person writing the Rumblr entry. However, it should be noted that she has resided within Candy’s mind for a long time, and therefore should know a thing or two about it that others don’t.