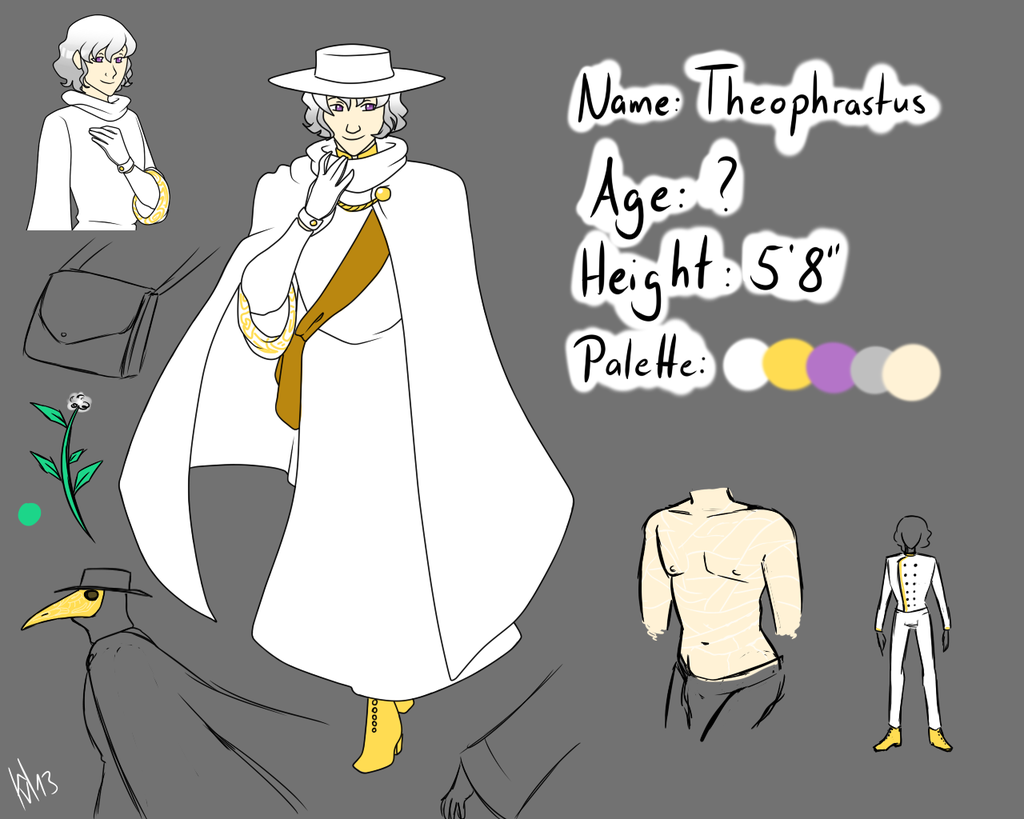 (Theo is based on a German myth and I submitted him as an NPC in an OCT. Cocoa and Coffee will be put up here later, too.)

Theophrastus, only introduces himself as “Theo”

Description:
Theo dresses mostly in white and gold, covering up his body in long, flowing robes and capes. He often wears several layers of clothing above each other, since his pigmentation is getting weaker with each passing decade and he therefore gets sunburns more easily. He knows how to heal them up quickly, but he prefers to be protected from the sunlight even still.
When he isn’t expecting or planning to engage with people, he usually wears his bird mask as well for the reasons below.
The first impression he makes is usually kind, gentle and polite and has a very careful way of speaking, pronouncing every word very clearly (although in other languages than German not always right) and sometimes pausing to seemingly consider his next sentence.
The scars on his torso are from the treatment with the Herb of Life he had to undergo to return from the dead. He once had more of them, but they are very, very slowly healing up. He’s self-conscious about them anyways.

Abilities:
Theo has acquired knowledge and possession of a special plant, the Herb of Life, and its usage. With it, he can treat pretty much every wound, poisoning, sickness or injury within a very short time frame, and even slows down his own aging process considerably. He also knows a lot about occult alchemy and rituals, which he has begun combining with the tinctures, potions and other products he creates out of the Herb of Life. With this combination, he can even affect nonliving things positively - so long as they do still have a close connection to life. But the flip side of his knowledge is that he also knows how to do damage really well. Not that he would do that to humans, but magical or nonhuman creatures can become a target to him.
Due to his constant inhalation of his special mixture, his body has started to absorb the healing powers of the Herb. Not only does this extend his overall lifespan, he also recovers from wounds and most poisons extremely quickly. When he is wearing his mask, he heals up almost instantaneously, the longer he keeps it off the slower his healing rate gets. While wearing his mask this also allows him to tap into the full potential of the human body - a normal and untrained human body though! - regardless of the usual limits set by how much strain muscles can take before they tear.

The Herb of Life:
This plant is brightly colored, with diamond-shaped leaves and blossoms that remind of cotton. The herb is very difficult to find, but Theo has found a way to us its own and external occult powers to grow it unnaturally quickly from its seeds, of which he always keeps some close to his body.
It can be used as ingredient in all kinds of health-improving rituals, potions, balms and elixirs, and Theo knows a wide array of different recipes he keeps written down in a notebook. Consumed or applied in its pure form, the herb can accelerate regeneration - a broken bone might heal in one week instead of three - but it’s full powers, ranging from rapid healing to even reviving a dead person, can only be tapped into when it is used in mixtures and rites, most of which consume a lot of time and resources. Theo keeps preparing potions and balms when he has the time to do it, and therefore carries many with him, willing to trade them or give them away as rewards to others. Maybe even use them directly to heal others.
His favorite recipe is the one he uses for a mixture of herbs within his mask. The air filtered through these herbs lets him inhale the life-renewing power of the Herb of Life to its fullest extend, keeping him young and blessing him with an extremely high healing rate. It slows down the longer he goes without inhaling the special scent, but he can take one or two days before it gets into a potentially threatening area. His second favorite is a glowing potion which greatly enhances the physical abilities of a person by being an extremely rapid healing and painkilling potion. It strips the body of both the willingness and the need to refrain from actions that would damage muscles and bones too much, unlocking the full potential of the human body. It doesn’t work on all non-human beings though, and it is very difficult to create, so he only carries a small quantity of it around.
However, the Herb cannot perfectly regenerate the body. So Theo still has scars from the gruesome ritual necessary for his survival, and is slowly but surely losing pigmentation, which starts impairing his eyesight and makes being in the sun for too long very uncomfortable if he doesn’t get to inhale his mixture for a long enough time.

Personality:
As mentioned, his appearance and behavior usually create a very pleasant first impression. In fact, with his soft smile and calm voice, he usually comes across as if he was trying out for a role as Prince Charming in a fairy tale adaption. His kindness is - at least towards other humans - very genuine though.
If he comes across an injured human, he will likely treat them and depending on their helplessness even nurse them back to help if they need it.
However, he harbors a deep disgust for everything that is not human, especially demons and fae-like beings. While he will not damage his reputation by showing this too clearly, it might become noticeable that he is much less eager to offer his help to them, and usually needs to be coerced into it somehow.
While he rarely outright lies (he might skew and/or hold back information though) and tries to avoid harm for other humans, he can be very manipulative, and will become more ruthless in methods the more important his goal is to him. He might also disregard the lives of people he regards as bad or evil more easily than those of humans he considers innocent. Children fall into this category by default for him.
He takes his role as a medic/doctor very seriously, and extends it from people to humanity in general, regarding nonhumans as something like weeds that endanger and suffocate the human species. So he regards himself as Cleanser and Healer of Humankind, trying to ignore that he has a very sadistic and cruel aspect to his personality. He does, however, not necessarily pick a fight with nonhumans if they aren’t high on his priority list at the moment (healing and immediate threats to humans come first), so if a nonhuman leaves him alone, he usually treats it as a nonverbal non-aggression-pact until further notice.
Gestures of affection or trust remain in his memory for a long time, and he will both react very positively to them and try to keep himself worthy of them in the eyes of the person he got them from. Within reasonable limits.
He also does not like to share any of his secrets, including his occult and medical knowledge.
While he does consider himself a savior and protector of mankind, that also includes staying alive and able-bodied in his mind. If others die because saving them is a too big a risk, he regards it as a sacrifice that needs to be made for the greater good.

Backstory:
Theos past is for the most part remarkably unremarkable. He had a good and happy childhood with loving parents, and his teenage years went pretty smoothly for him, especially since he grew into an intelligent and handsome young man. The basic interest in medicine has accompanied him since his earliest childhood years, when he performed “surgery” on small animals - only later developing the understanding necessary to realize that he actually tortured them to death. Something that he didn’t take too easy, especially since it made him understand that he’d enjoyed the torture.

He was a very young man, blonde and dark-eyed when he purchased an odd bottle on a marketplace. Inside, he found an ever-moving being that later turned out to be a demon. Or fae. Or whatever.
"Spiritus Familiaris" was the na