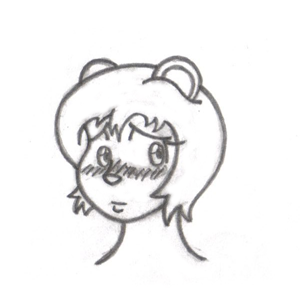 The following is a more in-depth look at my fat gerbil-girl Sandy.

Personality
Sandy is the very shy and introverted type, almost to the point of being awkward to be around. She gets embarrassed very easily and is typically very nervous while around other people. Due to her lack of confidence and feelings of general uneasiness, Sandy tends to dress in a manner that either hides her physique or mostly covers it up. Sandy hates her overall appearance and sometimes refers to herself as a "disgustingly fat blob". However, with the help of her mother Miranda and her friends at UM-Mart, Sandy's learning to cope with her extra heftiness and build up her self-esteem.

Furthermore, because of how badly she used to treat others, Sandy has developed a strong sense of empathy and compassion towards people. She tries to help others whenever possible and strives to be a better person every single day, all in the hopes of receiving some kind of redemption from her past mistakes.

Fears and Weaknesses
As mentioned from earlier, Sandy suffers from low self-esteem issues. She'll often regard herself as a very weak and unattractive person, when she even regards herself as a person at all. Sandy also tends to suffer from a severe case of depression, for there are many instances in her life where she wonders to herself, "why does life have to be so hard, why do I have to be so ugly, and why can't I make anything better?" Such questioning usually leads to Sandy crying herself to sleep that night, after stuffing her face full of ice cream, candy and other junky comfort food.

In regards to fears, Sandy's biggest fear would probably have to be her own obesity. The very idea of her becoming even fatter than she is now horrifies her beyond belief. That's why she always tries to exercise and eat healthy foods; so as to prevent herself from becoming even fatter.

Her other biggest fear would probably have to be people in general. Whenever she's out in public, Sandy sometimes feels that everyone around her is judging her and calling her names, even if that really isn't the case; so one could say that Sandy also has a social anxiety disorder, along with low self-esteem issues.

Secret Quirks
When really scared or nervous, Sandy will hyperventilate. Because of this, Sandy will often carry a folded-up paper bag in her pants pocket; in case a situation ever occurs where she'll need it.

Sandy also likes to bake a variety of desserts and pastries; her favorite being cake. Baking is one of the few things in her life that help to keep her sane, so every once in a while, she'll bake something in order to keep her mind off of her current problems. Sandy has also been taking some cooking classes lately so as to better improve her baking skills. As for what she does with said desserts after making them, she usually shares them with her coworkers at UM-Mart; since she's afraid that if left alone with her confectionary creations, she'll end up consuming them all herself (which Sandy has done before, multiple times).

And speaking of Ultra-Mega Mart, Sandy has a crush on her coworker/assistant manager William Michaels (a.k.a. Stilts). Despite his handicap, she can't help but find William attractive. Probably because Sandy feels that he's everything she's not; namely thin and confident. Stilts also seems to treat her as more of a very close friend rather than an actual employee, making Sandy wonder if he's possibly interested in her as a lover. Sandy has never bothered to ask Stilts about his feelings towards her however, for fear of being rejected.