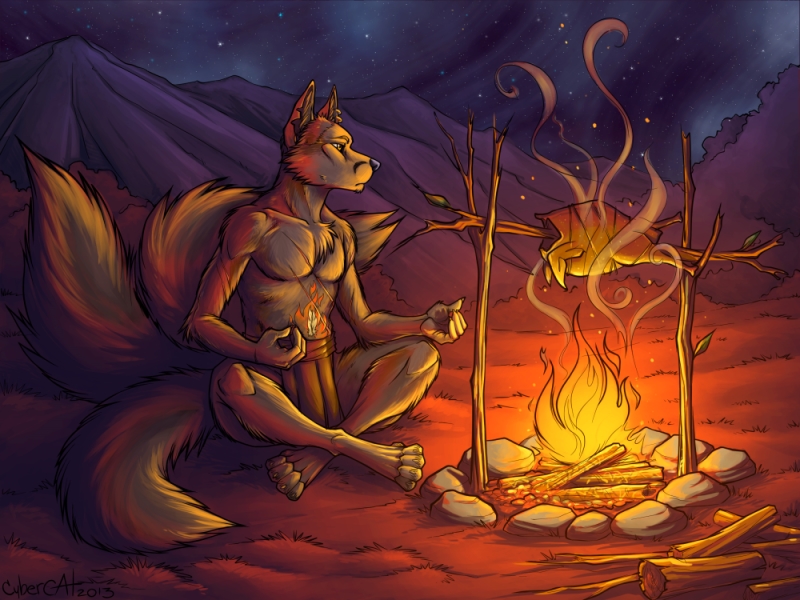 Born of a union between his mother, a fox spirit, and his father, a human, he grew up in a small, isolated forest.

Some of his mother's companions, members of a group called "the Apostles", whom were mostly forest spirits of the last of their kind, decided to adopt him into their group.

Friendships were maintained in their small little circle, but eventually he agreed to a plan; to spend the rest of his days in a human disguise, locking up his past memories to forget some of the worse things that had happened in his life, and electing to save humanity from horrific monsters that were prophesied to come in the future.

After that, he spent about two years as a human slave, not knowing anything but his name.
He was also, through one way or another, infected with lycanthropy.

Lycanthropes at this particular time in his world's "middle ages" were highly sought after for their strong physique and high resistance to the elements, and their transformations were tightly controlled so as to prevent them from harming anyone else.

After a while, he was sent with a caravan to one of the Northern kingdoms of his world, the kingdom of the dragon slayers.

For a while he was imprisoned in the castle with no further direction as to the future, but then he was freed by the prince of the kingdom, his slaver arrested for an assassination attempt on the king, and the rest of his fellows were allowed to become full citizens by Prince Frederik's mercy.

Years went by, as Matthew was trained in various types of combats as the first lycanthropic soldier of the kingdom.
He went on to become the Prince's personal bodyguard, and was almost seen as his older brother at times.

One day, the king ordered them both to go for the hunt; to search the nearby forests for the whitest stag they could find.
As they went at night, a stag they did find; but it was revealed to be a strong forest spirit rather than an animal.

They eventually ended up defeating him, but his last words to Matthew: "I knew you had it in you..."

As they returned to the castle, they found it in flames; apparently a small black dragon had come for the King's last hours, and as it approached them they prepared to fight once more.

But the fight never came; their weapons were burned, and the Prince was smacked to the ground.

The dragon then proceeded to tell them to move East, where they would find someone known as "the Red Witch", and to go to the ruins of the Three Ancients, an old pact of three dragons that swore to protect the world from evil in days past.

They disguised themselves as commoners and went on a journey together.

They ended up in the East, and found the Red Witch: a young, red-haired human woman with a penchant for fire magic, living by herself until a Gnoll troop from Mother's Legion had attacked her home.

They ended up fighting the group together, and all fell to their expertise.
But Matthew elected to spare one of the female warriors, helped to bandage her wounds, and told her there's no shame in saying one lost a battle: one had tried.

Then Alexandra Emberstone, as the Red Witch was called, called out Matthew's name despite never having met him; she revealed that she once had a vision of him, as a child, and that he and she were destined to be together.
Not taking much to this strange statement, he simply ignored it, took care of her, and they ended up going further East.

In time they ended up meeting many more people, defeated many monsters, and eventually Alex and Matthew founded their own Empire; the years went by, as they became immortal and ruled for centuries.
Scientific and technological advances came and went, mortal friends died over the years, and eventually they too became the last of their kind.

And over time, their love became meaningless, and the Empire crumbled.

Now he walks alone once more, hoping to find a meaning to his life again.