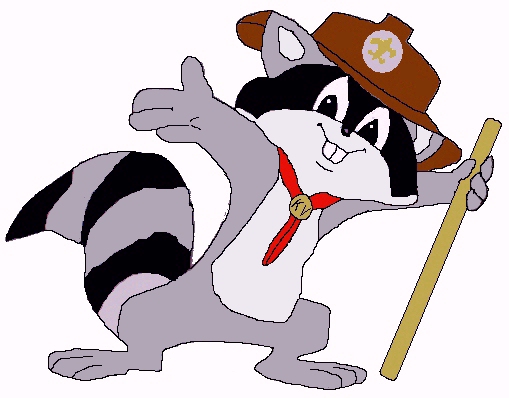 I designed KeVy (rendered from "K-V" and pronounced Kev-E) based on the Maine Dept. of Conservation's retired anti-litter mascot, TidyCoon, with written permission from ME DOC. TidyCoon was used by ME DOC in their anti-litter campaign, "Keep Maine Scenic" from 1963 into the early '80's, making TidyCoon older than the US Forest Service's Woodsy the Owl.

On Labor Day Weekend in 2009, while traveling in far DownEast Maine with my wife, we came upon what is probably the last TidyCoon sign in the state. The blog, Signs of Maine, posted a picture a few weeks later. I was instantly inspired and believed Tidy deserved a better fate than to be abandoned and forgotten on the side of US Route 1. So, I wrote to the ME DOC asking permission to resurrect Tidy for the local scouts. They gave me written permission as long as I altered the mascot in some way, didn't use the name TidyCoon, and only used it locally (not nationally). I submitted this rendering for their approval, which they gave.

KeVy was unveiled at our district banquet in March 2010 and became an instant success. He was quickly named in honor of the abbreviation of our district (Kennebec Valley). He has appeared on several scout event patches, district t-shirts, neckerchiefs, and even coffee mugs. Proceeds from the sales of these items has gone into camperships to help send needy scouts to summer camp.