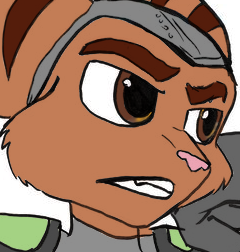 at the moment no direct visual reference but have a loose one.

Life is a fickle little shit, and you really can't try to circumvent it, despite how you may feel about it. Tristan Chamfer, or Three to his colleagues, was a servant of it. In one reality, well... he probably wouldn't have existed, considering the less than favorable actions of a guy by the name of Tachyon. Odd how things tended to work sometimes, eh? Fortunately in /this/ little nugget of reality, he did exist and Tachyon never really got a chance to rise to power. Least not as soon as he did before.

His story begins on the Lombax home planet known as Fastoon. Technologically inclined and innovative - such was the way of the Lombax. They were a people that worked hard, lived hard, and had a horrible propensity for making mountains out of molehills and then making those mountains into planets all because, well, it was pretty damn neat to do. He was raised as his parents were, and as his grandparents were, in one of the larger cities geared towards the education of the youth. To be the best of his race, that's what many expected of him considering who he had come from. His grandfather was a four bolt magistrate- incredibly high ranking and with no small amount of renown, and his father? Well, he was a damned hard worker who ended up becoming a professor some time prior to his birth.

And it was kind of a pain in the ass y'know, to have to live up to those expectations. His childhood knew hard work from the start- always studying in school, constantly striving to remain at the top of the class while maintaining the precarious balance of a social life on top of that. The edge of knowledge combined with a few physical proficiency here or there really did him favours by no small amount. Probably why he had a decent degree of popularity among his peers and all, but it was really a mystery when he decided to just sort of. Hang with a social outcast- an old family friend, his dad said, but such an acerbic, loner guy that he wasn't really the most popular. Even if he didn't exactly like the thought of it they did sort of become friends in the long run.

Considering where he came from though, eventually he did find his studies focusing on the more physical as years drifted by. If he was going to escape from his old man's shadow, well, why not take a path not frequently chosen?

How old was he, but seventeen? Eighteen? Either way he was young. At his prime and more than willing to invest a bit of time in the Lombax militia. Hell, he'd been looking forward to it since he was around sixteen- dead-set on that goal and doing whatever he needed to do in order to push himself towards it. You could say that because he had the help of a family friend, he was a bit more prepared for the rigorous training that came with joining the guard than most of his peers. Boot camp wasn't exactly the most arduous of things, but it was there that he learned how much he loved the feeling of a gun in his hand, how great it was to ride on the thrill of the militant lifestyle.

It wasn't for everyone, but Tristan found his home was here. Through his conditioning he discovered that it was, well... his more native environment. Everyone was equal of the battlefield, so why get all worked up over how his parents may have felt about these little changes? You could say that he didn't care about it, and you'd be kind of right. A whole year of training went by, and considering the lack of wars that Fastoon had been involved in during his youth, he really had nothing to look forward to other than going home and doing whatever his superiors asked of him.

To be honest, it kind of sucked.

But really, it shouldn't have come as a surprise when he got an invitation to join the Praetorian Guard. It was a good use of his talents, and he proved to be incredibly talented with weapons. You could say he was a bit innovative with utilizing weapons in manners that many folks hadn't thought about. His parents couldn't really blame him when he took off with the news in mind. While College was an option, it wasn't his option- he could've been a great doctor, or a mechanic, or even a damned good athlete. But he decided to climb the ranks of the Praetorian Guard instead. He had a focus, something to propel him into something that was far more enjoyable than the mundane tick of civilian life. Prodigal, a real talent for the field of combat, was the conclusion that came to the minds of several of his peers when they saw him in his field of choice. Within the Guard, well, there was only room for improvement. He'd learn how to be the best of the best, consequences be damned.

So really life has kind of worked out for him, in a weird sort of way. It's not like he can complain, too much about it, and why would he? He's taking the reigns of his own life and coming out of the shadows of his ancestors in order to leave a mark of his own on the world. And there's nothing sweeter than that.

Intelligence is the greatest gift that anyone can have. It can spell the difference between life and death, and assist in maintaining some awareness of the world with a keen eye. Tristan is someone who's valued that thought and pushed it to the fullest extent of his abilities.

Perceptive, his mind's as sharp as the tools that find themselves and his hand. His superiors have commended his ability to remain in control of himself at all times and read a situation through before doing anything about it. This is partly the reason why he was so damned successful in school in the first place, and why it netted him a few friends in his childhood. Looking at others and reading in between the lines is just one of his specialties, and that's a good thing too- who would want someone that couldn't read body language, or understand underlying messages? Well, someone other than a simpleton. But it's probably because of this level of perception that he finds himself incapable of not looking for something between the lines.

Is it difficult for him to trust others? Not really, although you'd probably believe he was gullible with how easily he'll go along with someone's schemes if they're entertaining enough. Not the case either. He's a good judge of character and can easily back out of something if it's not something he cares for at all. You could say that Tristan is supremely lax in his down time and wouldn't be too far off. He doesn't like worrying about the matters of the world but frequently does, and because of this he may come off as a bit of a worrywart at the most inconvenient of times.

Order and a routine are preferable to having his life out of control and wild ; his time in the militia has made him a bit of a straggler for punctuality and having things set perfectly. You could say that his whole life set him up for it really, and the effects of his environment show through his hard working and determined nature overall. He's never one to turn down a challenge, but is smart enough to know when to relent. His nature is something that can outright contradict itself at times and prove to be a huge pain in the ass if you don't know him well enough though.

Orders are frequently listened to with a steady hand, and there's been several times where he's led squadrons despite his age. Obviously he has some degree of leadership skill, otherwise he'd just be, y'know, a mindless drone.