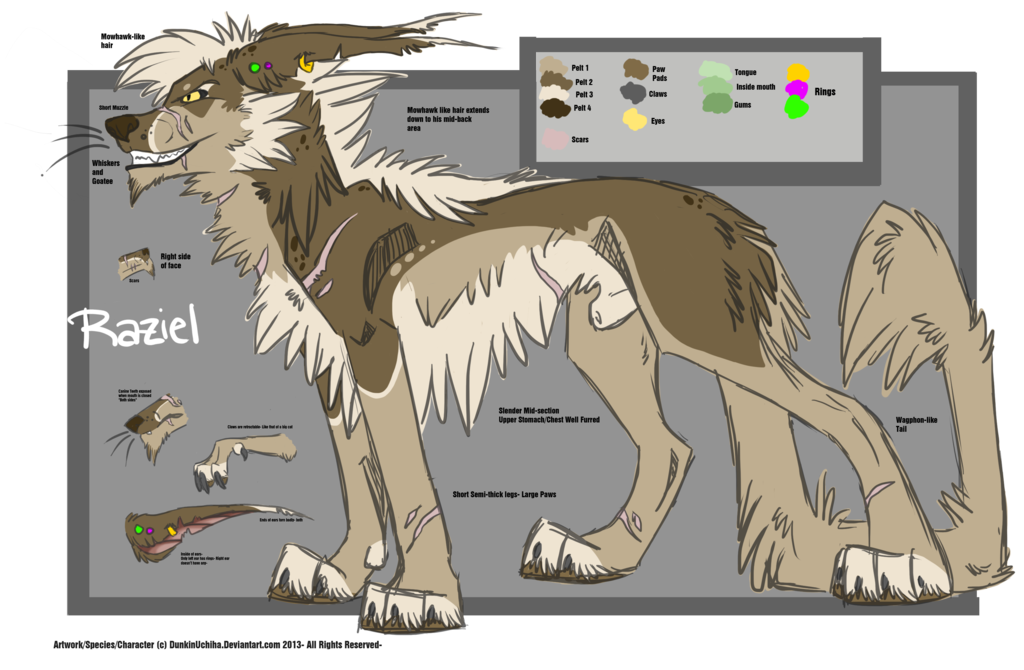 So okay- I've been doing some SUPER MASSIVE INSANE Thinking for a long long time- And now my brain hurt....no but really I have been pondering over the idea of having a "Alternate Fursona" and behold this is what my hands threw together. And I like it-

So this guy is my Alternate Fursona- also is my Male-sona. Yes. Cus I've been wanting one for a while lol-

Don't worry though, Dunkin is still my main fursona- But I need another to represent me on the sidelines- as well as in my comic/story I'm currently working on. This guy will be in it- thus making me-myself a fixture in it haha- cus I want to have myself in it somehow and that's the way to do it. Since Dunkin is a Wolf she wouldn't have a place in there. Mythical beasts/Hybrids only- so yeah.

Just wanna throw that out there. He's not just "Another" Character- he is me and I am him. XD

So this guy is a Vorken X Wagphon hybrid/cross - Making him quite the unique guy. Since Vorken are a subspecies of Wagphon, its possible for them to mate XD

Age: 29 (Young for his species- this would make him roughly a teenager)

Raziel is a very headstrong guy. He's very cocky and arrogant at times, and tends to have a bit of an issue with authority. He doesn't make friends well but when he does he's very loyal.

Not afraid to push his bounds and is a bit of a potty mouth. Never takes things very seriously and tends to over-react at times.

He's loud and a tad selfish. He's also quite the pervert.

YES- You may draw Raziel you needn't ask permission to do so- but DO NOT abuse the privilege to do so- This is meant for Reference purposes ONLY- Do not repost and/or claim as your own works.

:star:IMPORTANT NOTE: The Wagphon/Vorken species (or any mixture of ) are all a CLOSED species- These guys were developed by yours truly back in 2009. I've put in A LOT of effort/time/blood/sweat and tears into creating and maintaining these guys so please respect ALL copyrights- Currently I am and should be the ONLY person with one; with exception to one other individual ~Crimsonpaw/Borzoibones. I will perhaps one day sell some Pre-Made and even Custom Wagphon's in the future but its not a 100% deal- If I ever do I'll announce it. This species and all its Sub species (Such as Wagons) are the sole property of myself (H. Scurlock) Aka Dunkin-

Any mis-use of my characters/species/Ref sheets will be considered theft and will be dealt with accordingly- Please respect this! Thank you-

Pretty soon I will be have a comic in the works- This guy will be in it- along with all my other prized Wagphons/Vorkens and other Mythical creatures. I'm not sure when this Comic will be started but its currently in "Plan phase". So keep a lookout for it-

NOT for free use- Please do not repost this ref sheet or claim as your own works- This artwork/character is NOT to be reposted on your account(s), Blogs, Sites, RP's, ETC for any reason at anytime. This ref sheet is for Reference purposes ONLY- Please respect that.

You are free to draw ANY of my characters as long as you give credit where credit is due- and LINK me; I'd love to see!