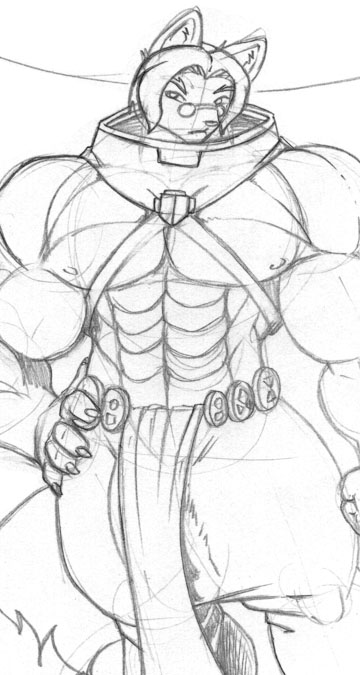 Coyote is one of the many "servant-level" gods that serve under the gods of the Native Council. Coyote serves as both the jester under Tahera who she is his original master and warrior by Ursus when he wants to be more than a mere jester.

Also during his time, he likes to come down to earth to play his tricks with the humans of the native tribes often using intimidation to get things done. One of his ventures did include getting in on relationships with many different women including his infamous affair with a chief's daughter who was arranged to be married.

that led to the creation of the "Old Man Coyote" rumor which includes him having a ridiculously large penis. Simply a smear campaign against his character over the fact that he got some with a human and better than her future husband.

There were more stories and rumors coming from his master Tahera about wanting to replace him due to the incident and his constant interference with the mortals on Earth. The person they are considering is Launa who previously in one instance stopped the woman from a catastrophe and he will not have that.

He does meet Launa in her moment of weakness as of being an immortal and at the end of her violent Viking days, and developed a relationship so strong it could not be know when something is about to go wrong which it did at the peak of their relationship, Coyote has brutally taken both her powers and mortality and leaves her for dead. The Native Council has taken note of this and has Launa empowered to fight to get her powers back.

After his defeat to overpower the council, he has been sentenced to live his immortality as a powerless human and is stripped of his title. However his knowledge of the mystical arts during his visits to earth have not been erased.

Coyote does find Launa living in Amsterdam and sets his plans to once again steal her powers but through a loser named Frederick to put her in a false sense of security. However his plan failed when Frederick overcomes his inabilities and throws Coyote into the spell made to sap her powers and reduces him to a lifeless husk.

However in the morgue where his body is stored, the spell had a side effect that not only restored his power but enhances his physique into a new monstrous size turning him into a powerful titan along with the abilities of the extraction spell to take life force from anyone he wishes to make himself stronger. His ambitions are fully restored, and now partnered with Lady Belia, they set their sights not only the overrule of the Native Council but the domination of the Earth itself.