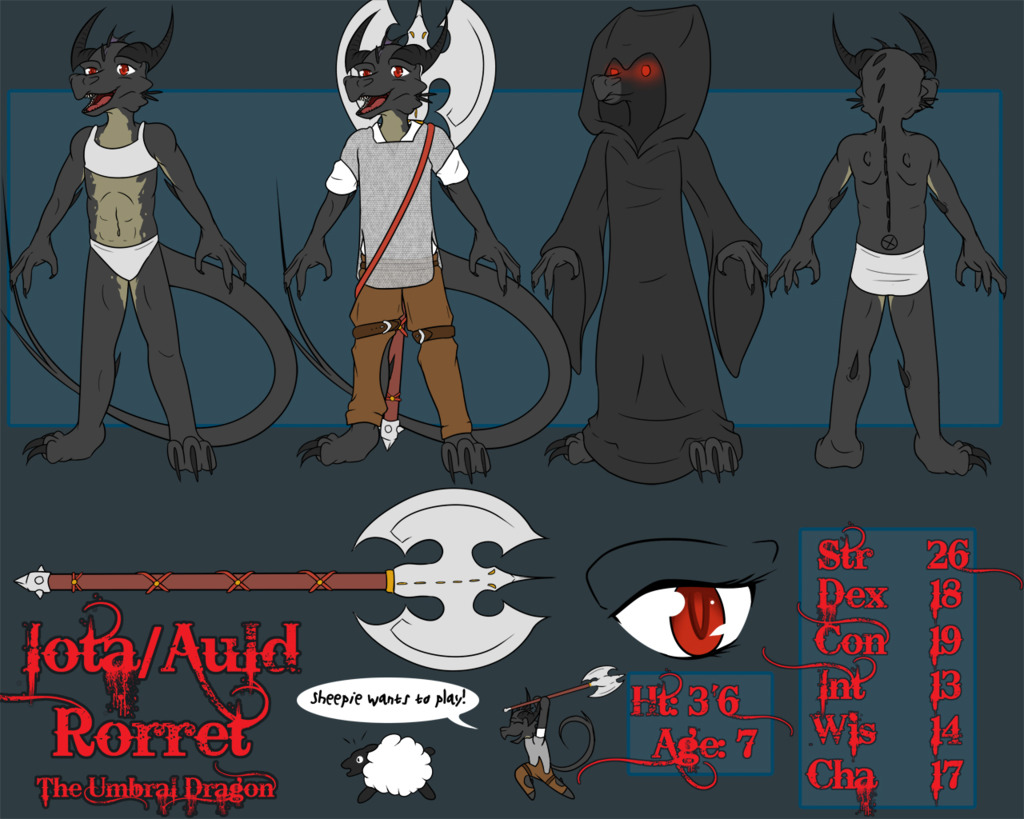 ** I forgot her chest coloration F5 for update **

This is a character I redid for an eventual evil game that will be coming up in our Pathfinder/D&D games. I played her a long time ago (June 2008) as a half shadow dragon but there are no shadow dragons in Pathfinder, only in Dungeons and Dragons, so I had to redo her profile from her old design. Also in the previous game she would 'play' (aka attack and kill) with things. The group learned really quick not to 'play' with her as they had seen her 'play' with non-sentient livestock... Like sheep. Oh and she is a fighter if you can't tell, and is only 7 years old XD

If her stats seem a little sick... I rolled really well for once... And we are working from the point buy system in the Advanced Races Guide. Our GM is allowing us 25 points which goes into the category of monstrous races. Something she can do is emit shadows around her. I wasn't able to find a way to get that onto the sheet. These shadows provide her extra protection when she is a low lit area (aka, things go from a 20% miss chance to a 50% miss chance). While my character is not a 'true' half dragon (cause that is way to freaking expensive to make using the point buy system) she has a story as to how she ended up as she did.

Iota was kidnapped as an infant, from her adventurer parents, to the shadow realm by a shadow dragon who wanted to save her child who had died. She preserved her child's (Auld) soul and placed it in the infants body. She did this in hopes that her child's soul was strong enough, since it was a dragons soul, to overwrite the human child's soul/personality. Raised and warped by living in the Shadow plane, Iota's form began to shift to resemble the other soul (the shadow dragon soul) within her. But since the original form was that of a human, many of the dragon attributes did not develop as expected. She may look like a half shadow dragon, she does not have many of the immunities that a dragon species typically has. Also instead of the dragon soul (Auld) taking over like the mother dragon was hoping, Iota and Auld formed a split personality between the two of them. Due to the time that had passed the mother dragon could not separate the two souls without endangering the soul of her child, as they had become intertwined with one another. Either out of developing love for the child regardless it was only half hers; or fear for her own child, the dragon came to love the new child she had created as if it were her own.