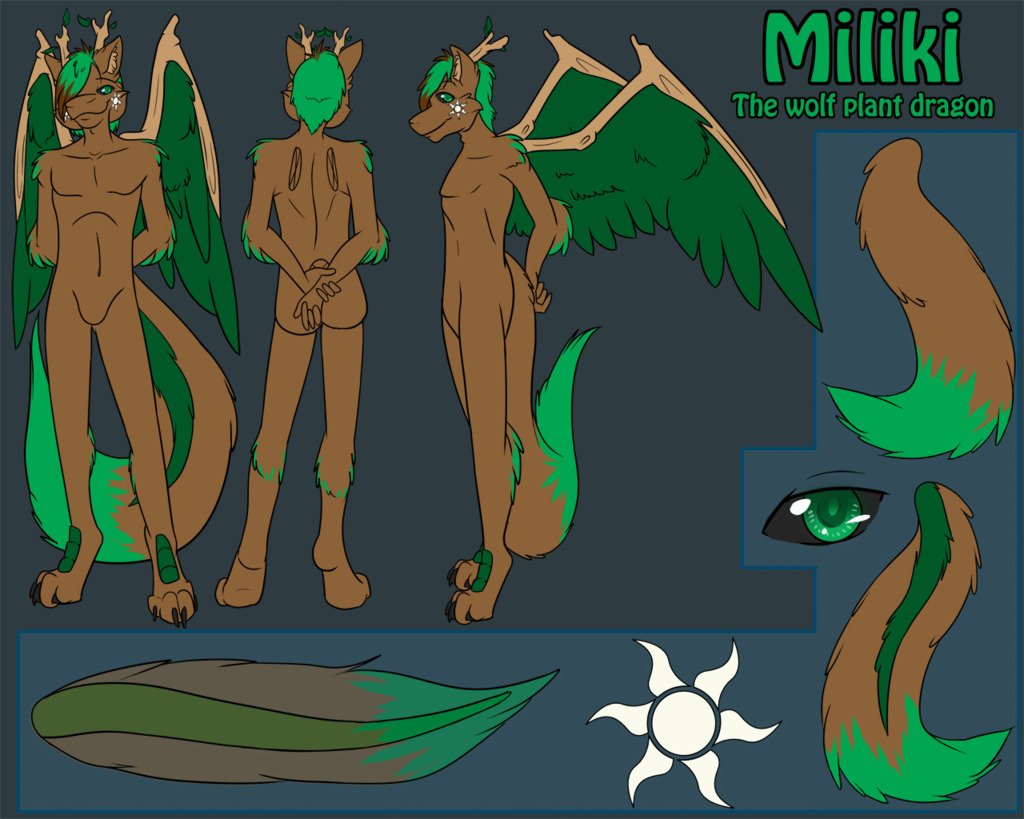 Ok, I was talking with some friends and I mentioned that I didn't have very many male characters and that I planned to make another male character. Then it came up in conversation that I should just give Miliki a male form. I have thought about it before. I had planned on doing so, but just didn't have the creative thought to execute it. It fits my belief structure that everything has a male and female aspect, so why not Miliki! So here I made Miliki a guy. Still haven't decided on clothing for him yet.

There are a few changes. His horns are slightly longer than his female aspect. There are even leaves that are beginning to grow on the branches. His hair color is the reverse, being primarily green with streaks of brown. Also the leaves on the wings are darker in color than the female aspect. Miliki's male side also has streaks of green on his shoulder, elbow, and leg fluff. And there is no chest fluff on him, it was transferred to his shoulders. Also since he is the opposite gender I switched the moons on the cheek to a sun which also can glow.

A few bits of important info, that normally would have been written on the sheet. First his wings can be hidden or vanish into his back. He does this with the use of magic. Since he is a druid, she can use the power of nature to alter his body shape. If you can't tell, the cheeks can be turned on and off. Sometimes they activate with severe emotions, like when he is embarrassed they may turn on. Both his eyes are the same color, green. His hair just happens to be covering one of his eyes. His hair fluff typically covers his right eye. His wings are made out of leaves and branches, that is from his plant dragon heritage. Also the tail on the bottom is a demonstration that he has a fully prehensile tail underneath all the fur of his tail, it is just covered up mostly by lots of fluffy fur. It only shows itself out underneath but does not show the entire length of the tail which actually travels to the tip. I walk on my toes and have high ankles (not a flat footed walker).

As someone called him my Wragon. He is druid who uses magic to shift his form/gender. This is his earth/plant dragon (hence the leaf wings)/ wolf form. He has the ability to hide his wings.

Miliki’s personality is playful and strong outwardly so, but behind doors (aka the bedroom) he is timid and a submissive. Miliki is also bisexual.